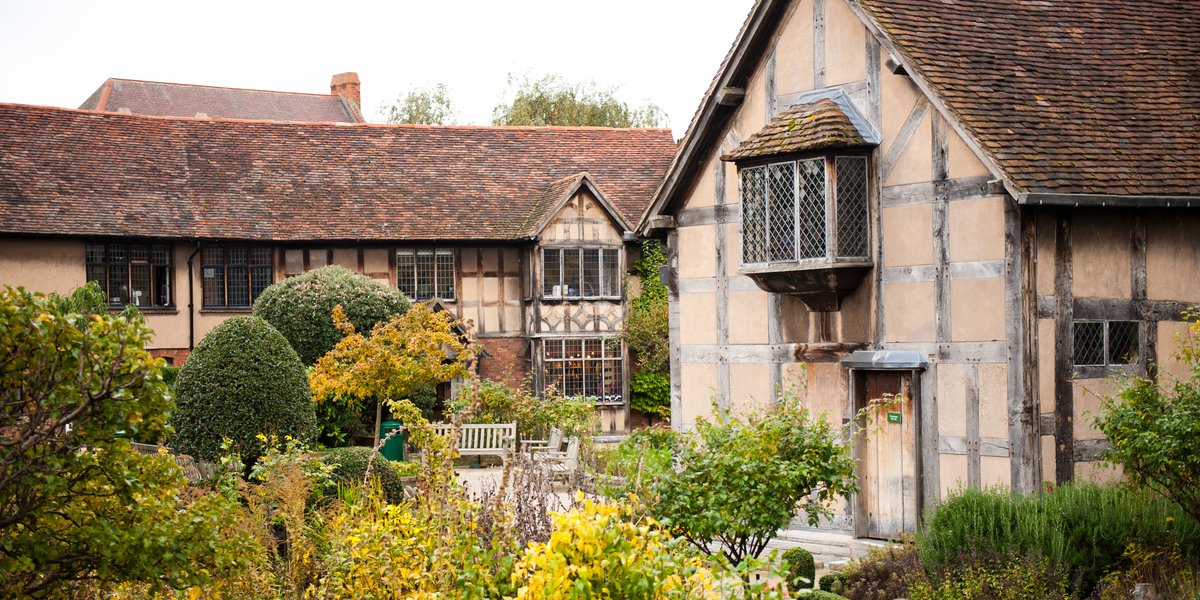 Williams Shakespeare must represent the most read of all the playwrights studied in English lessons all around the world. His birthplace is a 16th century half-timber framed house situated in Henley Street, Stratford-upon-Avon, Warwickshire, England, that has been restored.

Shakespeare’s house was originally owned by the Hart family until the late 18th century. In 1847, it was purchased by the Shakespeare Birthplace Trust, who are now the custodians of it. The house is visited by tourists from all over the world wanting to see its contents and say that they have followed in the footsteps of the great playwright. Paris might be considered romantic but so is visiting the home of the man who penned Romeo and Juliet.

Inside the house can be found the Falcon Inn chair, or Bidford chair, that Shakespeare is thought to have sat in while taking part in in drinking competition at the Falcon Inn, Bidford-on-Avon. In the birth room, there is a late 16th century boarded oak chest and an oak cradle from those times. In the kitchen is placed a pipkin or cooking pot, the kind that was around when Shakespeare was. It is made of earthenware, has three legs and a handle, and would have been used for heating food when placed above hot coals.

In addition to Shakespeare’s House, you can also visit Anne Hathaway’s Cottage in Cottage Lane, Hall’s Croft, and Mary Arden’s House in Station Road. Anne Hathaway, of course, married Shakespeare in 1582. She was 26 years old, while he was 18. She was to outlive her husband by 7 years. Mary Arden was Shakespeare’s mother.

Occupying the Georgian terraced house where Charles Dickens lived between 25 March 1837 and December 1839 is now a museum dedicated to him. The museum is located at 48 Doughty Street, Holborn, in the London Borough of Camden. Dickens published The Pickwick Papers (1837), Oliver Twist (1839), and Nicholas Nickleby (1839) during this period. He was a prolific writer. A lesser-known fact about Dickens is that he always wrote facing North. So, there is a tip for budding writers.

For another Dickens location, if you take a walk east along Fleet Street in London, you will come across the Ye Olde Cheshire Cheese. The pub dates from 1667 and is not only a pub Dickens alludes to in his A Tale of Two Cites but one he frequented himself. If you are looking for somewhere that Dickens stayed overnight, then look no further than The Lion Hotel, Shrewsbury, where Dickens stayed in 1838 and 1858. We know this from his letters that were published. The hotel has even named a suite after him. In fact, the very room that he stayed in.

Mary Webb during her lifetime lived at Spring Cottage, Lyth Hill, Bayston Hill, Nr Shrewsbury, Shropshire, England, among other places. Seven for a Secret (1922) was a novel that Webb wrote party at Spring Cottage and partly whilst in London. Although the house is privately owned, you can still take in the Shropshire locations surrounding it that inspired Mary Webb to write her romantic novels and poems. The county of Shropshire was referred to as Silverton in her novels. All six of Mary Webb’s novels were set in Shropshire. Her novel Precious Bane (1924) was praised by the then Prime Minister Stanley Baldwin. Her novel Gone to Earth (1950) when adapted for television was filmed on location in the Long Mynd, Stiperstones, and Much Wenlock. So, plenty of sites to take in around this area to see how Mary Webb was inspired.

So, that ends our journey. Three great writers and the very places that influenced them. Maybe visiting those places might inspire you, too.

Best Things to Do in Nyang Nyang Beach, Bali